Squeezing a few more PPD out of the FX-8320E

In the last post, the 8-core AMD FX-8320E was compared against the AMD Radeon 7970 in terms of both raw Folding@home computational performance and efficiency.  It lost, although it is the best processor I’ve tested so far.  It also turns out it is a very stable processor for overclocking.

Typical CPU overclocking focuses on raw performance only, and involves upping the clock frequency of the chip as well as the supplied voltage.  When tuning for efficiency, doing more work for the same (or less) power is what is desired.  In that frame of mind, I increased the clock rate of my FX-8320e without adjusting the voltage to try and find an improved efficiency point.

My FX-8320E proved to be very stable at stock voltage at frequencies up to 3.6 GHz.  By very stable, I mean running Folding@home at max load on all CPUs for over 24 hours with no crashes, while also using the computer for daily tasks.   This is a 400 MHz increase over the stock clock rate of 3.2 GHz.  As expected, F@H production went up a noticeable amount (over 3000 PPD).  Power consumption also increased slightly.  It turns out the efficiency was also slightly higher (190 PPD/watt vs. 185 PPD/watt).  So, overclocking was a success on all fronts. 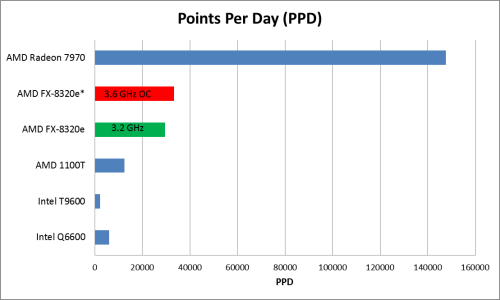 As demonstrated with the AMD FX-8320e, mild overclocking can be a good way to earn more Points Per Day at a similar or greater efficiency than the stock clock rate.  Small tweaks like this to Folding@home systems, if applied everywhere, could result in more disease research being done more efficiently.

Leave a Reply to Moments Of Inspiration Cancel reply