In the last article, I investigated how the power limit setting on an Nvidia Geforce GTX 1080 graphics card could affect the card’s performance and efficiency for doing charitable disease research in the Folding@Home distributed computing project. The conclusion was that a power limit of 60% offers only a slight reduction in raw performance (Points Per Day), but a large boost in energy efficiency (PPD/Watt). Two articles ago, I looked at the effect of GPU core clock. In this article, I’m experimenting with a different variable. Namely, the memory clock rate.

The effect of memory clock rate on video games is well defined. Gamers looking for the highest frame rates typically overclock both their graphics GPU and Memory speeds, and see benefits from both. For computation projects like Stanford University’s Folding@Home, the results aren’t as clear. I’ve seen arguments made both ways in the hardware forums. The intent of this article is to simply add another data point, albeit with a bit more scientific rigor.

To conduct this experiment, I ran the Folding@Home V7 GPU client for a minimum of 3 days continuously on my Windows 10 test computer. Folding@Home points per day (PPD) numbers were taken from Stanford’s Servers via the helpful team at https://folding.extremeoverclocking.com.  I measured total system power consumption at the wall with my P3 Kill A Watt meter. I used the meter’s KWH function to capture the total energy consumed, and divided out by the time the computer was on in order to get an average wattage value (thus eliminating a lot of variability). The test computer specs are as follows:

I ran this test with the memory clock rate at the stock clock for the P2 power state (4500 MHz), along with the gaming clock rate of 5000 MHz and a reduced clock rate of 4000 MHz. This gives me three data points of comparison. I left the GPU core clock at +175 MHz (the optimum setting from my first article on the 1080 GTX) and the power limit at 100%, to ensure I had headroom to move the memory clock without affecting the core clock. I verified I wasn’t hitting the power limit in MSI Afterburner.

*Update. Some people may ask why I didn’t go beyond the standard P0 gaming memory clock rate of 5000 MHz (same thing as 10,000 MHz double data rate, which is the card’s advertised memory clock). Basically, I didn’t want to get into the territory where the GDDR5’s error checking comes into play. If you push the memory too hard, there can be errors in the computation but work units can still complete (unlike a GPU core overclock, where work units will fail due to errors). The reason is the built-in error checking on the card memory, which corrects errors as they come up but results in reduced performance. By staying away from 5000+ MHz territory on the memory, I can ensure the relationship between performance and memory clock rate is not affected by memory error correction.

I put together a table of results in order to show how the averaging was done, and the # of work units backing up my +500 MHz and -500 MHz data points. Having a bunch of work units is key, because there is significant variability in PPD and power consumption numbers between work units. Note that the performance and efficiency numbers for the baseline memory speed (+0 MHz, aka 4500 MHz) come from my extended testing baseline for the 1080 and have even more sample points.

The following graphs show the PPD, Power Consumption, and Efficiency curves as a function of graphics card memory speed. Since I had three points of data, I was able to do a simple three-point-curve linear trendline fit. The R-squared value of the trendline shows how well the data points represent a linear relationship (higher is better, with 1 being ideal). Note that for the power consumption, the card seems to have used more power with a lower memory clock rate than the baseline memory clock. I am not sure why this is…however, the difference is so small that it is likely due to work unit variability or background tasks running on the computer. One could even argue that all of the power consumption results are suspect, since the changes are so small (on the order of 5-10 watts between data points). 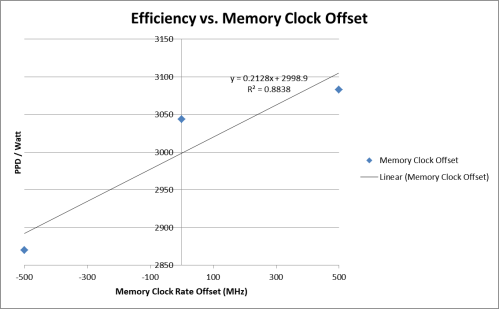 Increasing the memory speed of the Nvidia Geforce GTX 1080 results in a modest increase in PPD and efficiency, and arguably a slight increase in power consumption. The difference between the fastest (+500 MHz) and slowest (-500 MHz) data points I tested are:

Another way to look at these results is that underclocking the graphics card ram in hopes of improving efficiency doesn’t work (you’ll actually lose efficiency). I expect this trend will hold true for the rest of the Nvidia Pascal series of cards (GTX 10xx), although so far my testing of this has been limited to this one card, so your mileage may vary. Please post any insights if you have them.

Welcome back. In the last article, I found that the GeForce GTX 1080 is an excellent graphics card for contributing to Stanford University’s charitable distributed computing project Folding@Home. For Part 2 of the review, I did some extended testing to determine the relationship between the card’s power target and Folding@Home performance & efficiency.

Setting the graphics card’s power target to something less than 100% essentially throttles the card back (lowers the core clock) to reduce power consumption and heat. Performance generally drops off, but computational efficiency (performance/watt of power used) can be a different story, especially for Folding@Home. If the amount of power consumed by the card drops off faster than the card’s performance (measured in Points Per Day for Folding@Home), then the performance can actually go up!

The test computer and environment was the same as in Part 1. Power measurements were made at the wall with a P3 Kill A Watt meter, using the KWH function to track the total energy used by the computer and then dividing by the recorded uptime to get an average power over the test period. Folding@Home PPD Returns were taken from Stanford’s collection servers.

To gain useful statistics, I set the power limit on the graphics card driver via MSI Afterburner and let the card run for a week at each setting. Averaging the results over many days is needed to reduce the variability seen across work units. For example, I used an average of 47 work units to come up with the performance of 715K PPD for the 80% Power Limit case:

The only outliers I tossed was one day when my production was messed up by thunderstorms (unplug your computers if there is lighting!), plus one of the days at the 60% power setting, where for some reason the card did almost 900K PPD (probably got a string of high value work units). Other than that the data was not massaged. 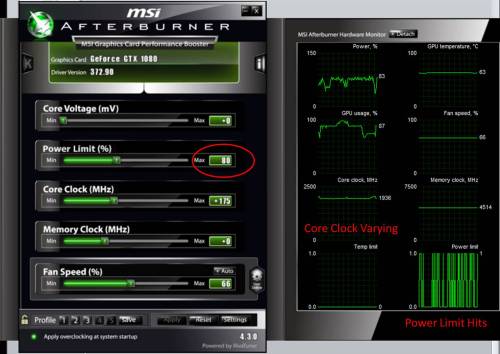 As expected, the card’s raw performance (measured in Points Per Day) drops off as the power target is lowered.

The system power consumption plot is also very interesting. As you can see, I’ve shaved a good amount of power draw off of this build by downclocking the card via the power limit. 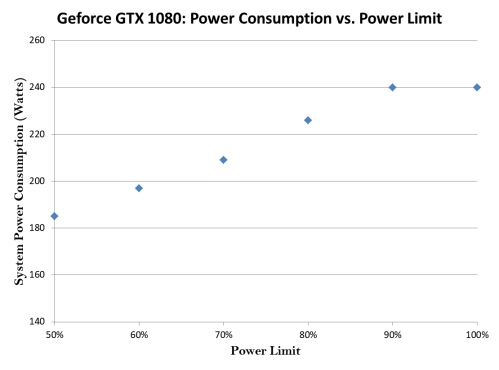 By far, the most interesting result is what happens to the efficiency. Basically, I found that efficiency increases (to a point) with decreasing power limit. I got the best system efficiency I’ve ever seen with this card set to 60% power limit (50% power limit essentially produced the same result). 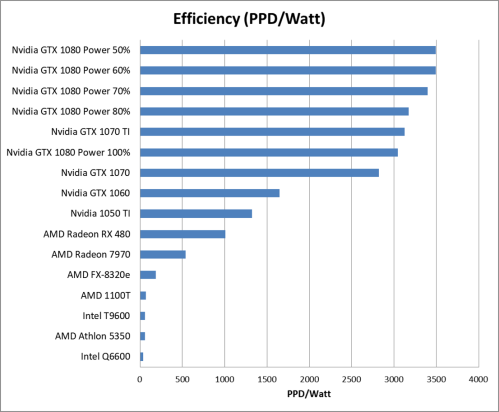 For NVIDIA’s Geforce GTX 1080, decreasing a graphic’s card’s power limit can actually improve the efficiency of the card for doing computational computing in Folding@Home. This is similar to what I found when reviewing the 1060. My recommended setting for the 1080 is a power limit of 60%, because that provides a system efficiency of nearly 3500 PPD/Watt and maintains a raw performance of almost 700K PPD.