Folding on the NVidia GTX 1060

Folding@home is Stanford University’s charitable distributed computing project. It’s charitable because you can donate electricity, as converted into work through your home computer, to fight cancer, Alzheimer, and a host of other diseases.  It’s distributed, because anyone can run it with almost any desktop PC hardware.  But, not all hardware configurations are created equally.  If you’ve been following along, you know the point of this blog is to do the most work for as little power consumption as possible.  After all, electricity isn’t free, and killing the planet to cure cancer isn’t a very good trade-off.

Today we’re testing out Folding@home on EVGA’s single-fan version of the NVIDIA GTX 1060 graphics card.  This is an impressive little card in that it offers a lot of gaming performance in a small package.  This is a very popular graphics card for gamers who don’t want to spend $400+ on GTX 1070s and 1080s.  But, how well does it fold? 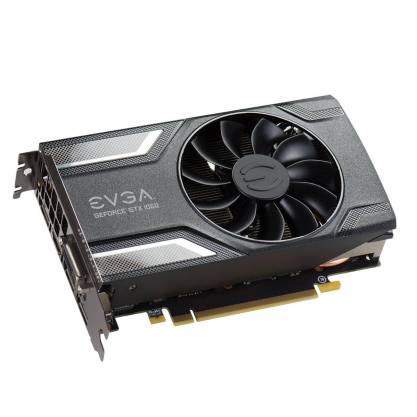 For this test I used my normal desktop computer as the benchmark machine.  Testing was done using Stanford’s V7 client on Windows 7 64-bit running FAH Core 21 work units.  The video driver version used was 381.65.  All power consumption measurements were taken at the wall and are thus full system power consumption numbers.

If you’re interested in reading about the hardware configuration of my test rig, it is summarized in this post:

Information on my watt meter readings can be found here:

I Got a New Watt Meter!

The Nvidia GTX 1060 delivers the best Folding@Home performance and efficiency of all the hardware I’ve tested so far.  As seen in the screen shot below, the native F@H client has shown up to 330K PPD.  I ran the card for over a week and averaged the results as reported to Stanford to come up with the nominal 305K Points Per Day number.  I’m going to use 305 K PPD in the charts in order to be conservative.  The power draw at the wall was 185 watts, which is very reasonable, especially considering this graphics card is in an 8-core gaming rig with 16 GB of ram.  This results in a F@H efficiency of about 1650 PPD/Watt, which is very good. 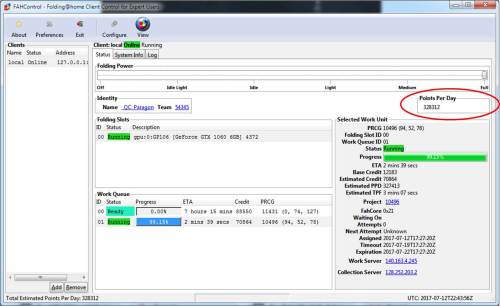 Here are the averaged results based on actual returned work units

Note that in this plot, the reported results previous to the circled region are also from the 1060, but I didn’t have it running all the time.  The 305K PPD average is generated only from the work units returned within the time frame of the red circle (7/12 thru 7/21) 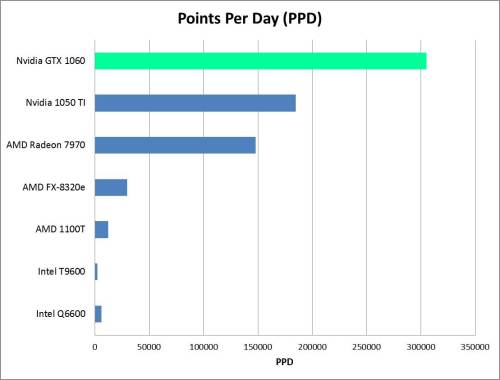 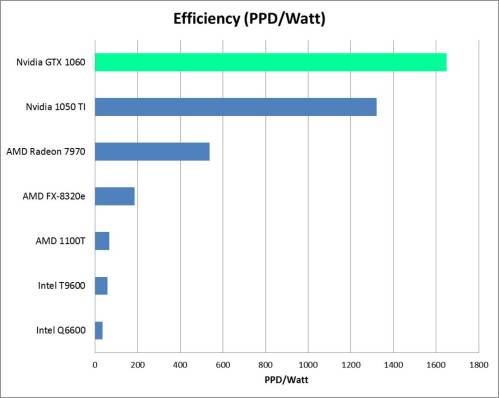 For about $250 bucks (or $180 used if you get lucky on eBay), you can do some serious disease research by running Stanford University’s Folding@Home distributed computing project on the Nvidia GTX 1060 graphics card.  This card is a good middle ground in terms of price (it is the entry-level in NVidia’s current generation of GTX series of gaming cards).  Stepping up to a 1070 or 1080 will likely continue the trend of increased energy efficiency and performance, but these cards cost between $400 and $800.  The GTX 1060 reviewed here was still very impressive, and I’ll also point out that it runs my old video games at absolute max settings (Skyrim, Need for Speed Rivals).  Being a relatively small video card, it easily fits in a mid-tower ATX computer case, and only requires one supplemental PCI-Express power connector.  Doing over 300K PPD on only 185 watts, this Folding@home setup is both efficient and fast. For 2017, the NVidia 1060 is an excellent bang-for-the-buck Folding@home Graphics Card.