Released in March 2017, Nvidia’s GeForce GTX 1080 Ti was the top-tier card of the Pascal line-up. This is the graphics card that super-nerds and gamers drooled over. With an MSRP of $699 for the base model, board partners such as EVGA, Asus, Gigabyte, MSI, and Zotac (among others) all quickly jumped on board (pun intended) with custom designs costing well over the MSRP, as well as their own takes on the reference design.

Three years later, with the release of the RTX 2080 Ti, the 1080 Ti still holds its own, and still commands well over $400 on the used market. These are beastly cards, capable of running most games with max settings in 4K resolutions.

But, how does it fold?

Folding at home is a distributed computing project originally developed by Stanford University, where everyday users can lend their PC’s computational horsepower to help disease researchers understand and fight things like cancer, Alzheimer’s, and most recently the COVID-19 Coronavirus. User’s computers solve molecular dynamics problems in the background, which help the Folding@Home Consortium understand how proteins “misfold” to cause disease. For computer nerds, this is an awesome way to give (money–>electricity–>computer work–>fighting disease).

Folding at home (or F@H) can be run on both CPUs and GPUs. CPUs provide a good baseline of performance, and certain molecular simulations can only be done here. However, GPUs, with their massively parallel shader cores, can do certain types of single-precision math much faster than CPUs. GPUs provide the majority of the computational performance of F@H.

Testing is performed in my old but trusty benchmark machine, running Windows 10 Pro and using Stanford’s V7 Client. The Nvidia graphics driver version was 441.87. Power consumption measurements are taken on the system-level using a P3 Watt Meter at the wall.

I did extensive testing of the 1080 Ti over many weeks. Folding@Home rewards donors with “Points” for their contributions, based on how much science is done and how quickly it is returned. A typical performance metric is “Points per Day” (PPD). Here, I have averaged my Points Per Day results out over many work units to provide a consistent number. Note that any given work unit can produce more or less PPD than the average, with variation of 10% being very common. For example, here are five screen shots of the client, showing five different instantaneous PPD values for the 1080 Ti. 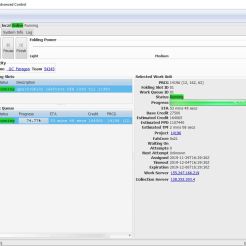 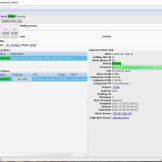 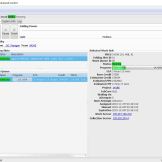 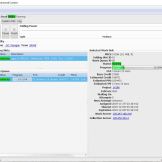 The following plot shows just how fast the 1080 Ti is compared to other graphics cards I have tested. As you can see, with nearly 1.1 Million PPD, this card does a lot of science. 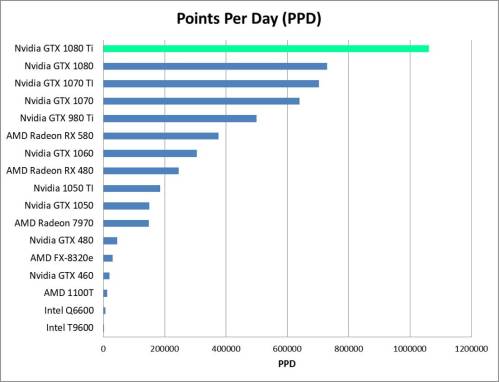 With a board power rating of 250 Watts, this is a power hungry graphics card. Thus, it isn’t surprising to see that power consumption is at the top of the pack. 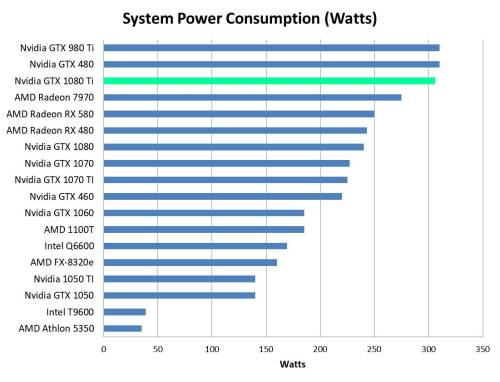 Power consumption alone isn’t the whole story. Being a blog about doing the most work possible for the least amount of power, I am all about finding Folding@Home hardware that is highly efficient. Here, efficiency is defined as Performance Out / Power In. So, for F@H, it is PPD/Watt. The best F@H hardware is gear that maximizes disease research (performance) done per watt of power consumed.

The Geforce GTX 1080 Ti is the fastest and most efficient graphics card that I’ve tested so far for Stanford’s Folding@Home distributed computing project. With a raw performance of nearly 1.1 Million PPD in windows and an efficiency of almost 3500 PPD/Watt, this card is a good choice for doing science effectively.