Folding@Home: The Need for Efficiency

Distributed computing projects like Stanford University’s Folding@Home sometimes get a bad rap on account of all the power that is consumed in the name of science.  Critics argue that any potential gains that are made in the area of disease research are offset by the environmental damage caused by thousands of computers sucking down electricity.

This blog hopes to find a balance by optimizing the way the computational research is done. In this article, I’m going to show how a simple setting in the graphics card driver can improve Folding@Home’s Energy Efficiency.

This blog uses an Nvidia graphics card, but the general idea should also work with AMD cards. The specific card here is an EVGA GeForce GTX 1060 (6 GB).  Green F@H Review here: Folding on the NVidia GTX 1060

If you are folding on a CPU, similar efficiency improvements can be achieved by optimizing the clock frequencies and voltages in the BIOS.  For an example on how to do this, see these posts:

The GPU Power limit slider is a quick way to control how much power the graphics card is allowed to draw. Typically, graphics cards are optimized for speed, with efficiency a second goal (if at all). When a graphics card is pushed harder, it will draw more power (until it runs into the power limit). Today’s graphics cards will also boost their clock rate when loaded, and reduce it when the load goes away. Sometimes, a few extra MHz can be achieved for minimal extra power, but go too far and the amount of power needed to drive the card will grow exponentially. Sure the card is doing a bit more work (or playing a game a bit faster), but the heaps of extra power needed to do this are making it very inefficient.

What I’m going to quickly show is that going the other way (reducing power) can actually improve efficiency, albeit at a reduction of raw output. For  this quick test, I’m just going to look a the default power limit, 100%, vs 50%. Specific tuning is going to be dependent on your actual graphics card. But, with a few days at different settings, you should be able to find a happy balance between performance and efficiency.

For these plots, I used my watt meter to obtain actual power consumption at the wall. You can read about my watt meters here.

A tool such as MSI Afterburner can be used to view the graphics card’s settings, including the power limit. In the below screenshot, I reduced the card’s power limit by 50% midway through taking data. You can clearly see the power consumption and GPU temperature drop. This suggests the entire computer should be drawing less power from the wall. I confirmed this with my watt meter. 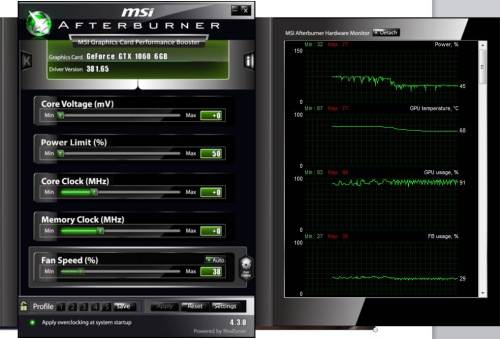 I ran the card for multiple days at each power setting and used Stanford’s actual stats to generate an averaged number for PPD. Reporting an average number like this lends more confidence that the results are real, since PPD as reported in the client varies a lot with time, and PPD can bounce around by +/- 10 percent with different projects.

Below is the production time history plot, courtesy of https://folding.extremeoverclocking.com/. I marked on the plot the actual power consumption numbers I was seeing from my computer at the wall. As you can see, reducing the power limit on the 1060 from 100% to 50% saved about 40 watts of power at the wall.

On the efficiency plot, you can see that reducing the power limit on the 1060 actually improved its efficiency slightly. This is a great way to fold more effectively.

There is a downside of course, and that is in raw production. The Points Per Day plot below shows a pretty big reduction in PPD for the reduced power 1060, although it is still beating its little brother, the 1050 TI. One of the reasons PPD falls off so hard is that Stanford provides bonus points that are tied to how fast your computer can return a work unit. These points increase exponentially the faster your computer can do work. So, by slowing the card down, we not only lose on base points, but we lose on  the quick return bonus as well.

Reducing the power limit on a graphics card can increase its computational energy efficiency in Folding@Home, although at the cost of raw PPD. There is probably a sweet spot for efficiency vs. performance at some power setting between 50% and 100%. This will likely be different for each graphics card. The process outlined above can be used for various power limit settings to find the best efficiency point.