Welcome back to the fold!  In the last post, I showed how increasing the # of CPU cores has a massive positive impact on the amount of cancer-fighting research your computer does, as well as how efficiently it does it.  In stock form, the quad core Intel Q6600 delivered just shy of 6000 points per day of F@H with all 4 cores engaged.  My computer’s total power draw at the wall was 169 watts.  So, that works out to be 6000 PPD / 169 Watts = 35 PPD/Watt.  Not too bad, considering the horrible efficiency numbers of the uniprocessor client.

In this article, I’m jumping forward in time to a more modern processor…the AMD Phenom II X6 1000T.  This six-core beast is the last of the true core-for-core chips from AMD (Bulldozer and newer CPUs have 2 integer units but only 1 floating point unit per core).  With 6 physical floating point cores, the AMD 1100T should be good at folding.

Note that I am obviously using a completely different computer setup here than in the last post (I have an AMD machine and an Intel machine).  So, the efficiency numbers aren’t a perfect apples-to-apples comparison, due to the different supporting parts in both computers.  However, the difference between processors is so large that the differences in the host computers really doesn’t matter.  The newer AMD chip is much better, and that is what is driving the results!

A note about the operating system…

The previous tests on my Intel Q6600 were performed using Windows 7 with the V7 folding client.  Due to Windows costing money, I used Ubuntu Linux on my AMD system with the V7 folding client.  Linux is a bit more capable of maxing out a PC’s hardware than Windows, so the resulting PPD numbers are likely slightly higher than they would be had the machine been running Windows.  However, the difference is typically small (5 percent or so).  Note that over time, this performance bonus can really add up.  This is why Linux is the preferred operating system for many dedicated Folding at Home users. 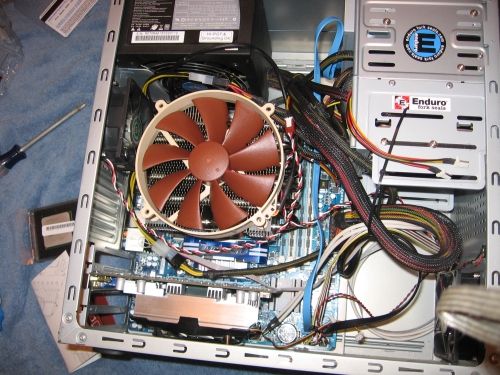 As expected, the 6-core 1100T is a performer when it comes to F@H.  Producing just shy of 13,000 Points Per Day with a total system power draw of 185 watts, this setup has an efficiency of 67 PPD/Watt.  This is almost twice that of the older Intel quad-cores.  Note that I am not Intel-bashing here…if you do some google searching, you will likely see that the new Intel Core I5 and I7’s do even better in both raw PPD and PPD/W than the AMD 1100T.  The moral of the story is that you should try and set up your folding Rig with the most powerful, latest-generation processor you can.  I recommend upgrading at least once a year to keep improving the performance and efficiency of your F@H contributions.  Don’t be that guy running an old-school Athlon X2 generation 300 points per day (while using 150 watts to do it).