Today, I’ll be reviewing the AMD Radeon RX 580 graphics card in terms of its computational performance and power efficiency for Stanford University’s Folding@Home project. For those that don’t know, Folding@Home lets users donate their computer’s computations to support disease research. This consumes electrical power, and the point of my blog is to look at how much scientific work (Points Per Day or PPD) can be computed for the least amount of electrical power consumption. Why? Because in trying to save ourselves from things like cancer, we shouldn’t needlessly pollute the Earth. Also, electricity is expensive!

AMD released the RX 580 in April 2017 with an MSRP of $229. This is an updated card based on the Polaris architecture. I previously reviewed the RX 480 (also Polaris) here, for those interested. I picked up my MSI-flavored RX 580 in 2019 on eBay for about $120, which is a pretty nice depreciated value. Those who have been following along know that I prefer to buy used video cards that are 2-3 years old, because of the significant initial cost savings, and the fact that I can often sell them for the same as I paid after running Folding for a while.

I ran into an interesting problem installing this card, in that at 11 inches long, it was about a half inch too long for my old Raidmax Sagitta gaming case. The solution was to take the fan shroud off, since it was the part that was sticking out ever so slightly. This involved an annoying amount of disassembly, since the fans actually needed to be removed from the heat sink for the plastic shroud to come off. Reattaching the fans was a pain (you need a teeny screw driver that can fit between the fan blade gaps to get the screws by the hub). 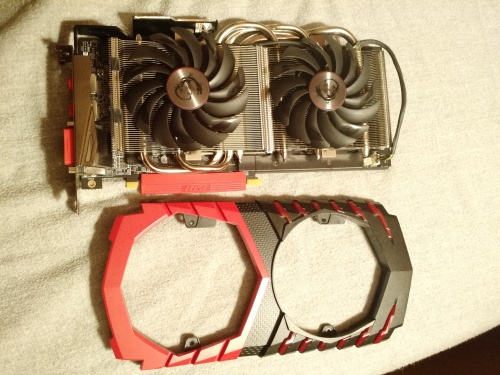 RX 580 with Fan Shroud Removed. Look at those heat pipes! This card has a 185 Watt TDP (Board Power Rating). 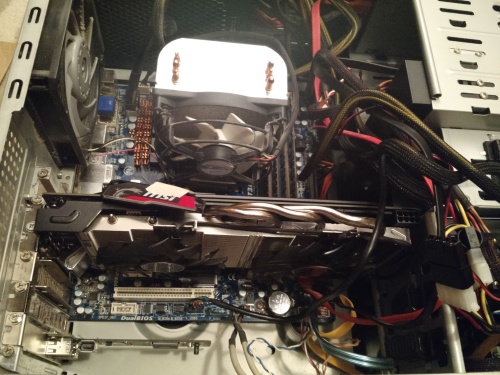 Testing was done on my rather aged, yet still able, AMD FX-based system using Stanford’s Folding@Home V7 client. Since this is an AMD graphics card, I made sure to switch the video card mode to “compute” within the driver panel. This optimizes things for Folding@home’s workload (as opposed to games).

I ran the RX 580 through its paces for about a week in order to get a good feel for a variety of work units. In general, the card produced as high as 425,000 points per day (PPD), as reported by Stanford’s servers. The average was closer to 375K PPD, so I used that number as my final value for uninterrupted folding. Note that during my testing, I occasionally used the machine for other tasks, so you can see the drops in production on those days.

I measured total system power consumption at the wall using my P3 Watt Meter. The system averaged about 250 watts. That’s on the higher end of power consumption, but then again this is a big card. 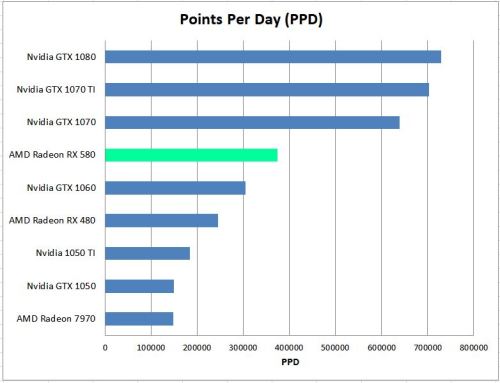 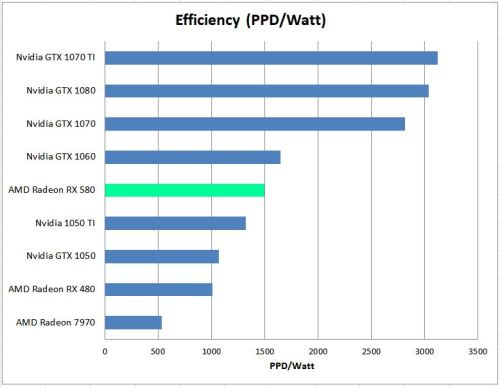 For $120 used on eBay, I was pretty happy with the RX 580’s performance. When it was released, it was directly competing with Nvidia’s GTX 1060. All the gaming reviews I read showed that Team Red was indeed able to beat Team Green, with the RX 580 scoring 5-10% faster than the 1060 in most games. The same is true for Folding@Home performance.

However, that is not the end of the story. Where the Nvidia GTX 1060 has a 120 Watt TDP (Thermal Dissipated Power), AMD’s RX 580 needs 185 Watts. It is a hungry card, and that shows up in the efficiency plots, which take the raw PPD (performance) and divide out the power consumption in watts I am measuring at the wall. Here, the RX 580 falls a bit short, although it is still a healthy improvement over the previous generation RX 480.

Thus, if you care about CO2 emissions and the cost of your folding habits on your wallet, I am forced to recommend the GTX 1060 over the RX 580, especially because you can get one used on eBay for about the same price. However, if you can get a good deal on an RX 580 (say, for $80 or less), it would be a good investment until more efficient cards show up on the used market.