Hi again.  Last week, I looked at the performance and energy efficiency of using an Nvidia GeForce GTX 1050 TI to run Stanford’s charitable distributed computing project Folding@home.  The conclusion of that study was that the GTX 1050 TI offers very good Points Per Day (PPD) and PPD/Watt energy efficiency.  Now, after some more dedicated testing, I have a few more thoughts on this card.

In the last article, I based the production and efficiency numbers on the estimated completion time of one work unit (Core 21), which resulted in a PPD of 192,000 and an efficiency of 1377 PPD/Watt.  To get a better number, I let the card complete four work units and report the results to Stanford’s collection server.  The end result was a real-world performance of 185K PPD and 1322 PPD/Watt (power consumption is unchanged at 140 watts @ the wall).  These are still very good numbers, and I’ve updated the charts accordingly.  It should be noted that this still only represents one day of folding, and I am suspicious that this PPD is still on the high end of what this card should produce as an average.  Thus, after this article is complete, I’ll be running some more work units to try and get a better average.

Folding While Doing Other Things

Unlike the AMD Radeon HD 7970 reviewed here, the Nvidia GTX 1050 TI doesn’t like folding while you do anything else on the machine.  To use the computer, we ended up pausing folding on multiple occasions to watch videos and browse the internet.  This results in a pretty big hit in the amount of disease-fighting science you can do, and it is evident in the PPD results.

Folding on a Reduced Power Setting

Finally, we went back to uninterrupted folding on the card, but at a reduced power setting (90%, set using MSI Afterburner).  This resulted in a 7 watt reduction of power consumption as measured at the wall (133 watts vs. 140 watts).  However, in order to produce this reduction in power, the graphics card’s clock speed is reduced, resulting in more than a performance hit.  The power settings can be seen here: 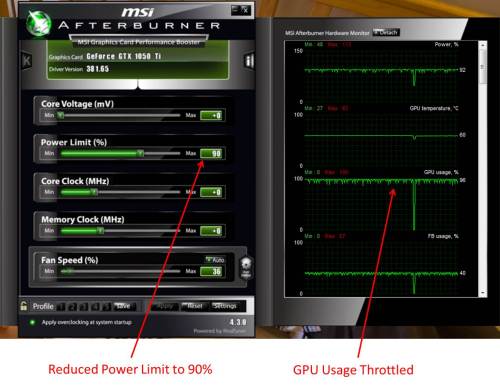 Observing the estimated Folding@home PPD in the Windows V7 client shows what appears to be a massive reduction in PPD compared to previous testing.  However, since production is highly dependent on the individual projects and work units, this reduction in PPD should be taken with a grain of salt. 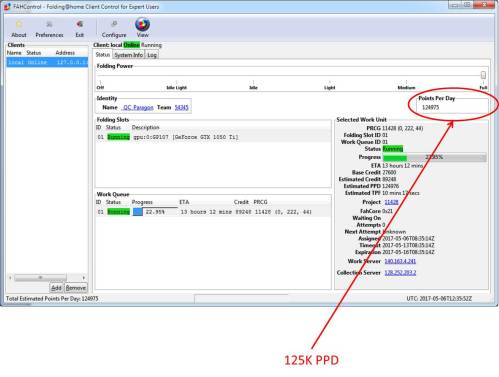 In order to get some more accurate results at the reduced power limit, we let the machine chug along uninterrupted for a week.  Here is the PPD production graph courtesy of http://folding.extremeoverclocking.com/ 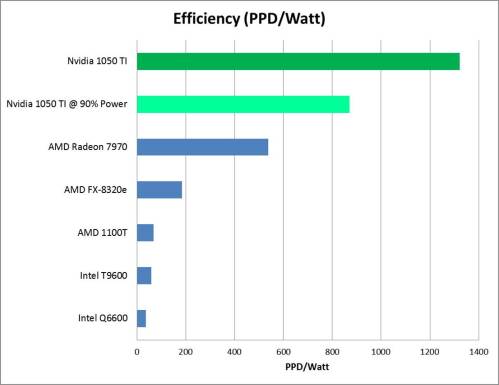 As expected, you can contribute the most to Stanford’s Folding@home scientific disease research with a dedicated computer.  Pausing F@H to do other tasks, even for short periods, significantly reduces performance and efficiency.  Initial results seem to indicate that reducing the power limit of the graphics card significantly hurts performance and efficiency.  However, there still isn’t enough data to provide a detailed comparison, since the initial PPD numbers I tested on the GTX 1050 were based on the results of only 4 completed work units.  Further testing should help characterize the difference.